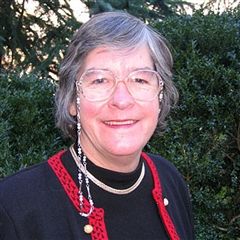 Class of 1956
Honored in 2011
Dr. Suzanne (Suzy) Townsend Purrington '56, a professor emeritus of Chemistry at North Carolina State University loved and respected as much for her teaching expertise as for her research acumen, was named the 2011 recipient of Foxcroft School’s Distinguished Alumnae Award at Saturday (April 16) at a special luncheon in Engelhard Gymnasium.

Foxcroft Alumnae Council President Sheldon Gerry Withers ’61 presented Purrington with the award, citing her outstanding contributions to the field of Chemistry as a teacher and research scientist, and to society as a volunteer and leader in myriad civic, educational and community organizations.

After Foxcroft, Suzy graduated Phi Beta Kappa in Chemistry from Wheaton College (Norton, MA), and earned her MA from Radcliffe College and a Ph.D. at Harvard University, where she was one of just eight women in the 60-student department. She did post-doctoral work and taught at Duke University for a year before combining teaching stints at the Shaw University, New York Institute of Technology, and Peace College with marriage, children and various civic and service endeavors.

In 1976, Suzy moved to North Carolina State University in Raleigh and soon developed a a reputation as a talented, tough-but-fair teacher and a researcher of note. In the lab, she focused on organofluorine chemistry, producing the first chemical compound to be used as an electrophilic fluorinating reagent and writing more than 25 publications. She received the Distinguished Service Award from the American Chemical Society’s Division of Fluorine Chemistry in 2005 for her contributions as a scientist and leader.

In the classroom, Suzy taught everything from freshman chemistry to special topics in organoflourine chemistery for pre-med scholars, combining a love of research with a talent for teaching to convey difficult subjects matter to students, science and non-science majors alike. She received the North Carolina State Outstanding Teacher Award in 1995 and retired, as a full professor, in 2001. She was also honored by the NC State Libraries for, among other things, designing a chemistry curriculum that integrates the use of literature and continues to serve on the its board.

Suzy has also served on a variety of committees and boards at her alma mater. She received the Wheaton College Alumnae/I Achievement Award in 2002 and an honorary degree from the school in 2008.
Back
This website uses cookies to ensure the best experience for visitors to our website.
By continuing to use this website, you consent to our use of these cookies.
See our Privacy Policy for additional information.