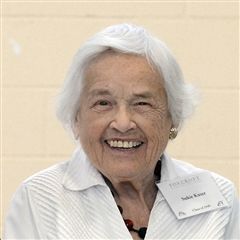 Class of 1949
Honored in 2015
Suzanne “Sukie” Kuser, Class of 1949, graduated from Bryn Mawr College with a Chemistry degree in 1953 and went to work for NSA, which had been established less than a year earlier, as a cryptologic linguist. (“They asked me if I was good at crossword puzzle and when I said yes, they hired me,” she says). It was the midst of the Cold War and Sukie helped to collect and analyze communications intelligence information. She cracked codes, learned Arabic and generally helped keep the world safe.

In 1953, she moved to the State Department, where she would spend the next 28 years. Sukie worked in Intelligence on resources, representing the Department on various interagency committees, where she was frequently the only professional woman at the table and had to stand up for State’s interests, which were often different from those of the CIA and military. She studied national security affairs at the National War College as one of just seven women in a sea of men and rose to be head of the U.S. State Department’s Intelligence Reporting Division. All told, Sukie spent more than three decades as a Cold Warrior of the first rank. Since retiring in 1986, she has continued as a part-time consultant and a senior reviewer of classified documents as the NSA.

Sukie’s love affair with Foxcroft dated back to in 1945 when she arrived planning to stay three years – and stayed for four. As a student she served as Head of Social Services, a representative to the Student Council, and a reporter for Tally-Ho! As an alumna, she helped create one of the first career panels for students, organized the School’s first phonathon, established a scholarship for daughter of foreign service officers, and assisted in countless unheralded activities that have enriched the lives of students and faculty alike. For 19 years, beginning in 1988, she served on the Board of Trustees, including several years as Vice President. She has been on numerous committees, including Buildings and Grounds, Development, Steering, Planned Giving, and she continues as a key member of the Investment Committee even now. In 1999, she received the Anne Kane McGuire Distinguished Service Award and in 2006, she gave the Invocation at Commencement.

Sukie has been served on many other boards and councils over the years, often related to her passion for gardening and nature or her abiding interest in international relations. Currently she sits on the boards of both the Friends of the National Arboretum and the Foreign Policy Discussion Group of Washington, D.C. She is a Fellow and serves on several committees of the National Tropical Botanical Garden. Her past service includes the Foreign Student Service Council, World Affairs Council, D.C., Institute of World Politics, McKee Botanical Garden, St. Johns Community Services, Blue Hill Library, and Georgetown Symphony.
Back
This website uses cookies to ensure the best experience for visitors to our website.
By continuing to use this website, you consent to our use of these cookies.
See our Privacy Policy for additional information.