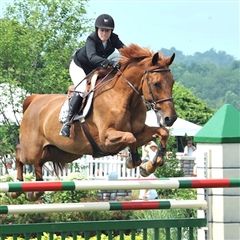 Class of 2009
Show jumping
Throughout 2010 and 2011, Nellie competed internationally. She traveled to Canada in 2010 and finished 8th in a World Cup class on her mount Iveena S. In 2011, she competed for the US at Wettenhall in England and in Chantilly France, where she had her best finishes — 2nd and 9th in the 1.35-meter classes. She returned home and finished 6th before a hometown audience in the $75,000 Upperville Jumper Classic that same year.

Nellie retired from competition when she entered George Washington University Law School. Since graduating in the spring of 2016, she has passed the Bar and is in the attorney honors program at the Federal Communications Commission in Washington, DC.
Back
An all-girls boarding and day school in Northern Virginia, Foxcroft prepares young women in grades 9-12 for success in college and in life. Our outstanding academic program offers challenging courses, including Advanced Placement classes and an innovative STEM program. Our premiere equestrian program is nationally recognized, and our athletic teams have won conference and state championships. Experience the best in girls' boarding schools: visit Foxcroft.
Foxcroft School, 22407 Foxhound Lane, Middleburg, VA 20117  |  Phone: 540.687.5555