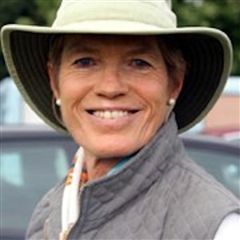 Class of 1972
Inducted 2014
Born in England and raised in Calgary, Alberta, Julie rode on the Canadian Eventing team for 10 years. She competed in three World Championships and one Olympic Games for Canada on her mare, Sumatra.

Juliet and her teammates won the gold medal at the 1978 World Championships and were all inducted into the Canadian Eventing Hall of Fame in 2009. She also had a short, but successful, career as a steeplechase jockey, mostly on the Virginia Point-to-Point Circuit and serves on the Selection and High-Performance Committees for the Canadian Eventing Team.

An active rider still, Juliet hunts with Piedmont Foxhounds and competes at many local horse trials. She has worked at Piedmont Equine since 2004 in several capacities — as a technician and in the front office, where her projects have included updating the practice's website and Facebook page, and organizing seminars. She also teaches local eventers and fox hunters.
Back
An all-girls boarding and day school in Northern Virginia, Foxcroft prepares young women in grades 9-12 for success in college and in life. Our outstanding academic program offers challenging courses, including Advanced Placement classes and an innovative STEM program. Our premiere equestrian program is nationally recognized, and our athletic teams have won conference and state championships. Experience the best in girls' boarding schools: visit Foxcroft.
Foxcroft School, 22407 Foxhound Lane, Middleburg, VA 20117  |  Phone: 540.687.5555