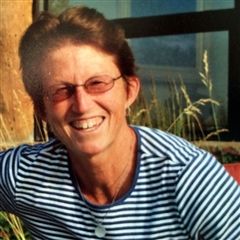 Class of 1972
Inducted 2016
A superb all-around athlete who excelled in field hockey, basketball and tennis in high school and college, Kitty Anthony Palmer '72 later became a successful coach and a champion paddle tennis player.The Guilford, CT, resident was a unanimous pick to be inducted into the Foxcroft School Sports Hall of Fame in 2016.

Born and raised in the New York metropolitan area, Kitty came to Foxcroft as a sophomore and quickly became noted for her athletic ability. She especially stood out in field hockey; in one two-year period she scored 37 of the team’s 54 goals — a feat that earned her an appearance in Sports Illustrated’s famous “Faces in the Crowd.” Kitty also played basketball and tennis, was Hound Captain and, as a senior received the Teresa E. Shook Award for skill and sportsmanship.

At Lake Forest College near Chicago, Kitty twice led the field hockey team in scoring, led the basketball team in scoring and rebounding one season and played No. 1 singles for Lake Forest’s undefeated tennis team. Kitty was also field hockey’s Most Valuable Player twice and was named an All-Star for the North Central Field Hockey Association Tournament. She was elected to the Lake Forest College Hall of Fame in 1986, her first year of eligibility.
After graduating with a degree in psychology, Kitty became a very successful high school coach of softball, field hockey, and tennis. She led the Guilford (CT) High School field hockey team to the 1991 Connecticut state championship and, 20 years later, coached Daniel Hand High (Madison, CT) to its first girls' tennis state title. Kitty just completed her 37th year of coaching field hockey; she has coached tennis for 15 years and has taught paddle tennis at the Madison Racquetball Club for 30 years.
But Kitty still finds time to play and compete herself. In paddle tennis, she and her doubles partner have been ranked as high as No. 2 in New England and No. 6 nationally. She also plays on an adult indoor field hockey team and a 4.5 USTA tennis team and plays golf competitively.