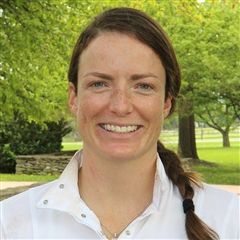 Class of 2007
Inducted 2019
Seldom has an athlete achieved such high standards in two such vastly different sports disciplines as riding and lacrosse.

During her senior year at Foxcroft, Coles was arguably the best junior equestrian in the country, winning the 2006 Bates USA Equitation year-end rider award and the Monarch International North American Equitation Championship. She continued training through her four years at Drew University and afterwards, reached the highest level of show jumping competition. She competes regularly on the Grand Prix circuit and has won several events, including the 2016 Brook Ledge Grand Prix and the 2017 Grand Prix of Michigan.

All through high school and college, though, Coles managed to find the time to pursue another of her favorite sports — lacrosse. She played both years that she attended Foxcroft and was an all-conference selection in the tough Independent Schools League the School belonged to at the time.

She also played for Team USA in the Southern Crosse Tournament in Australia where she helped her team win the gold medal.

Meanwhile, she continued working with a variety of top trainers, including John and Beezie Madden, Mark Leone, Belgian Olympian Francois Mathy, and U.S. rider Lauren Hough before returning to The Plains in 2013 to open Spring Ledge LLC.