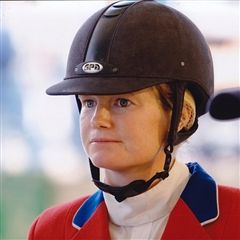 Class of 1996
Inducted 2018
A former member of the United States Equestrian Team and leading rider on the Grand Prix circuit, Eliza has won the American Grand Prix Association Rookie of the Year Award in 1998, when she was a sophomore at Davison College. She also helped the U.S. win several U.S. Nations Cup competitions as well.

Eliza’s success started early. At age 13, she earned U.S. Equestrian Federation First in the Nation honors in the Juniors; several years later, she added the First in the Nation Amateur title. From 2006-2008, Eliza rode on four U.S. Nations Cup teams. In 2006, she was a member of the winning Nations Cup team in Buenos Aires, Argentina, and an alternate for the team in Barcelona, Spain.

Although her sister Nancy ’89 spent three years at Foxcroft, Eliza came as a junior and mostly because of riding. She was one of the earliest participants in the Exceptional Proficiency program, which enabled her to train in Ocala, FL, in the winter, and compete up and down the east coast while in high school.

At Foxcroft, Eliza was a member of the Riding Officers Club and Foxcroft Riding Team as a senior. She also Grand Junior Champion at the Middleburg Hunter Classic that year. In 2012, the lifelong resident of Hickory, NC, retired from Grand Prix competition. She has focused on breeding, training, and teaching and her family.