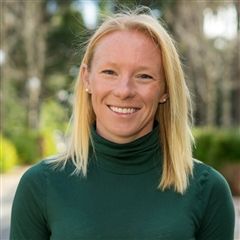 Class of 2005
Inducted 2018
Claire was an “impact player” who gave Foxcroft a lacrosse identity. She became the first player in school history to score 50 goals in a season in 2005, when she tallied 51, along with 24 assists, as a senior. She also was first Foxcroft player named Loudoun County Player of the Year by the Washington Post.

Claire also was one of the first Foxcroft lacrosse players to play for an NCAA Division I school. At the University of Massachusetts-Amherst, she saw action in 10 of the team’s first 12 games during her sophomore year, before an injury curtailed her collegiate career.

In addition to her lacrosse accomplishments, Claire played field hockey and rode at Foxcroft, serving as captain of the TSEL championship riding team in 2004-05. She received the Teresa E. Shook Award, Frocroft’s highest athletic honor, in 2005.

Claire, who has a BA from UMass and an MA from the University of San Francisco, helped organize the first lacrosse program at Castilleja High School in Palo Alto, CA, where she teaches. She has been head coach since 2010.